Took the bus from Riga to Tallinn. Saw the frozen Baltic Sea, and lots more frozen lakes with men fishing on them.

Tip for arriving in Tallinn (probably a good tip for anywhere) - know the street you're going to - our taxi driver had never heard of our hotel - The Merchant's House. It was a really good, brand-spanking new hotel in the old town. 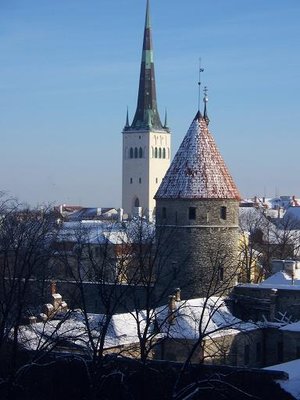 Tallinn was colder than Riga, but more beautiful (if more touristed) - the gourgeous old town is full of little medieval streets built right up onto a hill. On the first night we wandered around in the dark for a bit, looking at snow covered churches etc. We then went for a bit of a slap-up meal at a Russian restaurant, Troika, which was absolutely delicious, before hitting 'Tallinn's first Estonian pub', Hell Hunt (which apparently means 'gentle wolf'), for a beer or two. 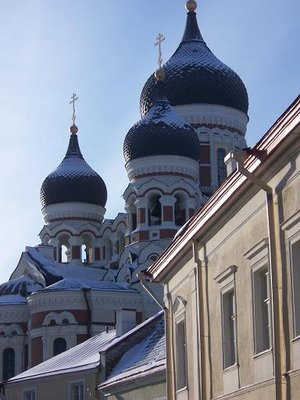 Tuesday spent a lot of time wandering round Tallinn, looking in Churches and popping in and out of shops to escape the bitter cold. Went to the Museum of Estonian History, which was worth a look, walked up Toompea Hill to Toomkirik and the Orthodox cathedral, and went to Fat Margaret, an old guard tower. Old Tallinn is really stunning. 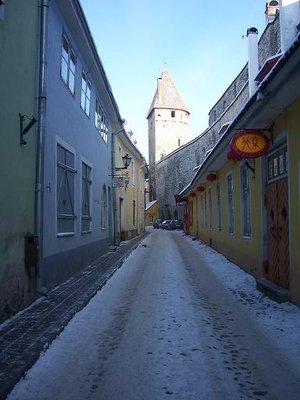 Riga is cold in February, but the snow adds a beauty and tranquility to the wide open public spaces and winding medieval streets. 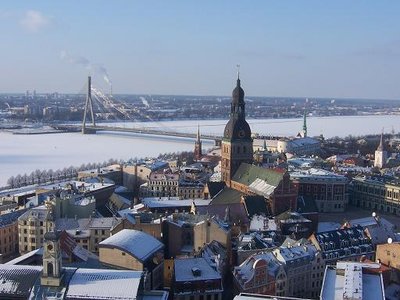 We arrived on Saturday evening and took a taxi to our hotel. We stayed at Ainavas which was a very nice place - because it was late and we were tired we got some food at the hotel restaurant, was good. 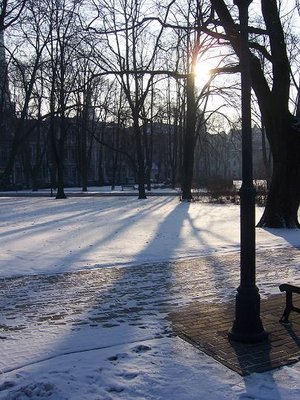 On Sunday we explored Riga - just wandering around the medieval district is interesting, and we spent a few hours wandering round here, before wandering onto the new bridge over the Daugava river. We had some Latvian food at Alus Seta on the town square where you can get a hefty plate of meat, potatoes and cabbage for about £2. 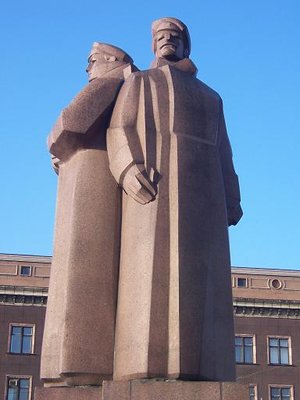 After lunch we wandered down to the Daugava river again - because it was so cold the river was frozen solid, and was dotted with men fishing through holes they had carved in the ice. Definitely worth a punt is a trip up the lift in the tower in St Peter's Church for great views over the city. Heading south of the old town, we had an interesting wander through the Central Market, held in a series of four disused aircraft hangers. I've never seen so many meat products in one place. After that, we headed out to the east of the old town to see the Art Nouveau architecture and have a look at the freedom statue. 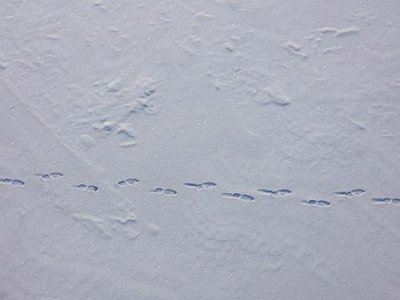 For Dinner we went to Rozengraals, a slightly cheesy medieval-theme restaurant where they only use authentic medieval recipes and ingredients that would have been available in medieval Riga. The place is very atmospheric, being in a 13th century cellar, and the food was pretty good - the fish was better value than the meat. 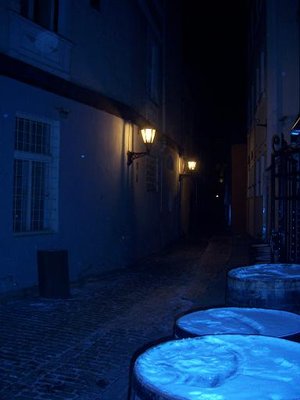 For Drinks, we went to Candle Bar, another down-in-a-cellar affair but kitted out all modern - pretty nice. After a wander around in the shimmering snow (and freezing cold) we ended up at Mr John Lemon, a kinda psychedelic-type-place with a possibly beatles-y theme.. I got a bit peckish later on and had a Latvian pancake, which was good.

Next day, had a lie-in then set off for Tallinn